Hello Lovelies, I had the pleasure of interviewing Mina Vaughn, author of the future book entitled How to Discipline Your Vampire published by Simon and Schuster’s Pocket Star!!! Check out her answers!!!!

Please tell is a little about bit about yourself?
Thanks so much for having me!  There’s not a whole lot to tell about me—I’m a skydiving adrenaline-junkie, editor-in-chief of Peanut Butter Enthusiasts magazine, breeder of pigmy hamsters and a professional shoe whore who writes dirty things for high heels.

I’m kidding.  Mostly.  I’m really just a girl standing here with a book asking for readers to love her.  My debut, How to discipline your vampire, drops August 19 from Simon and Schuster’s Pocket Star.  Also, I said “drops”, like it’s some sort of hip hop album or something.  Do people still say album?  Anyway, yeah.  Books.

How did you begin writing? Did you intend to become an author, or do you have a specific reason or reasons for writing each book?
I began writing when I was five.  I used to hang out with this massive gang of cousins and every day in my grandmother’s back yard, I would arrange scripted plays.  Ok, not scripted on paper, but I basically bossed everyone around and made them act out my scenes.  This is not, however, how I wrote my current book.  That would be gross.  Truthfully, I began writing for fun in college and then in earnest a few years later.  I’ve always been a storyteller… just ask my Grandma.

What is your favorite part about being a writer?
My favorite part is the fact that I get to indulge in my fantasies.  They don’t have to stay in my head. I get to live them out, all hot and messy, spread over my pages.  It’s really sexy.  And sticky.

Are the experiences based on someone you know, or events in your own life?
Well, I’ve always been intrigued by role play.  The idea of turning someone tried-and-true into a fantasy and getting to re-live the rush of newness is something that everyone should try once.  Or twice.  Or a dozen times.  It’s addictive!

How much research went into your characters?
I researched some facts about the jobs Cerise and William had, in addition to their lifestyles, but most of the scenes were just fantasies.

What are your current projects?
It’s a secret!  Do we need to put this question in?  I’d love to tell but I can’t.

Name one entity that you feel supported you outside of family members?
I have a support system of authors who are referred to as “the Filets”.  Some of us are published, some are not, but all of us are hot talented be-yotches and I would be going nowhere without their support and love.
Who are your favorite author and what is it that really strikes you about their work?
Currently my favorite author is Tiffany Reisz, and I was lucky enough to hang out with her at the New England RWA Chapter conference.  She is sweet, hilarious, and just brilliant.  Her books stand out to me because they are bold, unexpected, sensual and really captivating.  The amount of world-building she does is astonishing.  I really believe in the characters she has created.

Do you have any advice for other writers?
Defy convention.  Make up weird genres.  If it resonates with you, it may with someone else.  Don’t just stick with the formula.  Challenge yourself.  Challenge your reader.  Nothing that’s amazing should be easy.

Early Riser or Night Owl?  Neither. I love sleep as much as I love shoes.  And that’s a lot.
Winter or Summer? Summer!  Who likes shoveling?  I’m also terrified of an icicle impaling me.  Totally irrational fear, but it’s there, like a pointy death trap all season.

If you could have dinner with one person, dead or alive, who would it be and why?  It would be Dave Grohl from Foo Fighters.  I love his music, attitude, and sense of humor.  He lived through (and created) music history and still seems like the coolest most down to earth guy ever.

Sell your book in a tweet! In How to discipline your vampire, a punishment seeking vampire meets his match in a role-play obsessed Domme. 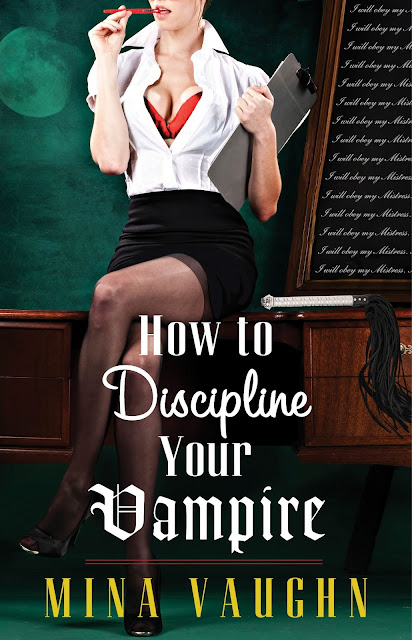 Cerise Norrel, Type A substitute teacher by day, is ready to quit being a domme. Despite her best intentions, none of her partners can keep up with her scene fetish and attention to detail—let alone her demand that they have a costume and set waiting every afternoon by the time she’s home from school. Over a dozen potential subs have left her in the past year, but just when Cerise thinks it’s impossible—that she’ll have to go back to vanilla relationships, or be alone forever--she meets William, who wants to make all her fantasies come true. He turns her home into a geisha’s dream apartment, a concert hall with a grand piano (which he uses to play an original composition while wearing a tuxedo), and even rents an abandoned loft for a zombie apocalypse scene—complete with canned goods. But there's something strange about William. Well, a lot of strange things. He must be absurdly rich, since he can afford to provide extravagant costumes and props on a daily basis without having to leave work early. He must be insane, since he puts up with Cerise's over-the-top demands. And most importantly, he doesn't redden when he's spanked, and his skin is as cool as satin sheets. When Cerise discovers she's become domme to the infamous "Chilly Willy," as he's known throughout BDSM urban lore, she begins to find out there's a whole lot more to her handsome submissive than a creative mind and a hard body. And when it’s William, ironically, who starts pressing Cerise to give him the kind of commitment she’s never given anyone, it’ll take everything she has to work through her issues, confront her past, and learn to be vulnerable.

An absolutely beautiful specimen was making his way towards my little table.

I sipped the soda again, careful to not smudge my lipstick.  Typically, Dommes were easy to find at mixers—the redder the lipstick, the stricter the rules.  Mine was crimson on the border of downright arterial.  I had hoped that my selection would weed out the weaklings in the pack.  I touched it up just in case it had faded and bent down to put the compact back into my bag.  By the time I leaned back up, he was in front of me.
"Hello," he said sheepishly, eyes downcast.

This was a good sign. Subs ought to act their place at events like this—unlike that last jackass.  Please, please be up to my challenge.

"Sit," I said to him, gesturing. His posture was erect, but guarded. This man was very stylish—a corduroy blazer over a graphic tee, paired with perfectly fitted dark jeans. Urban, hip. Thank God no leather—I didn't care how long I’d been involved in this sort of thing, I would never get into leather.  Unless it was required for a scene...then it would be acceptable.  He folded his hands neatly in his lap, and began the conversation in a surprisingly self-deprecating manner.

"I have something," he said, eyes still downcast, "I should tell you before we begin."

I leaned forward, ready to berate him for speaking out of turn, and not letting me begin our conversation.