Book Review: The Distance Between Us By Kasie West 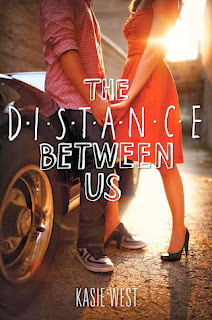 Seventeen-year-old Caymen Meyers studies the rich like her own personal science experiment, and after years of observation she’s pretty sure they’re only good for one thing—spending money on useless stuff, like the porcelain dolls in her mother’s shop. So when Xander Spence walks into the store to pick up a doll for his grandmother, it only takes one glance for Caymen to figure out he’s oozing rich. Despite his charming ways and that he’s one of the first people who actually gets her, she’s smart enough to know his interest won’t last. Because if there’s one thing she’s learned from her mother’s warnings, it’s that the rich have a short attention span. But Xander keeps coming around, despite her best efforts to scare him off. And much to her dismay, she's beginning to enjoy his company. She knows her mom can’t find out—she wouldn’t approve. She’d much rather Caymen hang out with the local rocker who hasn’t been raised by money. But just when Xander’s attention and loyalty are about to convince Caymen that being rich isn’t a character flaw, she finds out that money is a much bigger part of their relationship than she’d ever realized. And that Xander’s not the only one she should’ve been worried about.

First thoughts before reading
I wanted to read the distance between us for two reasons. One: because I’m such a fan of contemporary romance novels. Two: because I’d just read pivot point by Kasie West and loved it, so when I heard that she was doing a contemporary later this year I knew I had to read it.

My thoughts
First off, I knew I would like this book. I knew it would be cute, fluffy, and an easy read. What I didn’t know was that I would love it, or that it would exceed my expectations (LOL! I just stopped to think about harry potter for ten minutes after writing exceeds expectations. Ok, I’m back! I really enjoyed the distance between us.

The distance between us is about a girl named Caymen, who lives with her mother, and works in their doll store. Her mother has taught her that the rich will leave you and that they don’t talk to the lesser. One day she is working at the doll store when I rich boy walks in and beckons her to help him. First impressions are everything and he just blows it. After she helps him she thinks that is all she will ever see of him, but she is wrong and he returns. Now she finds herself spending less time at the creepy doll store and more time with the super-rich boy, Xander.  The question is will their “relationship” last or is their world just too far apart for them to connect together.

Caymen- she is a great character, very relatable. She’s just an ordinary girl. She goes to school, and works in her mom’s doll shop. It’s pretty much been this way her entire life! What I loved about her is her wit! She is so sarcastic, and sarcastic people are my favorite people, and it’s all day sarcasm too, it never stops. I’ve deemed her my new best friend, LOL.

Xander- I call him the boy I grew to love. After his first impression at the doll shop I deemed him as a arrogant rich boy, who believes everyone should bow to his feet, that quickly changed. He turns out to be so much more than his money. He’s in a constant state of confusion, and worry.  He really enjoys hanging out with Caymen and as the story develops they help each other discover something about themselves.
The secondary characters really balanced out the story. Caymen’s best friend and her boyfriend really helped balance out Caymen’s teenage life. Caymen’s mother is also a HUGE factor in the story and the way the plot sways.

Kasie West is turning out to be one of my new authors on the rise. This story was the perfect blend of romance, mixed with friendship and family. The writing blends everything together so effortless and is paced so well. The dialogue between all the characters is to die fun. I was either constantly laughing or smirking at the things that comes out of the characters mouth.

Overall, this was a wonderful surprise. I would recommend this book to anyone that enjoys contemporary romances!
Labels: review