Review for Hold Me Closer, Necromancer By Lish McBride 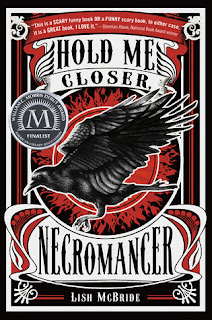 Sam leads a pretty normal life. He may not have the most exciting job in the world, but he’s doing all right—until a fast food prank brings him to the attention of Douglas, a creepy guy with an intense violent streak. Turns out Douglas is a necromancer who raises the dead for cash and sees potential in Sam. Then Sam discovers he’s a necromancer too, but with strangely latent powers. And his worst nightmare wants to join forces . . . or else. With only a week to figure things out, Sam needs all the help he can get. Luckily he lives in Seattle, which has nearly as many paranormal types as it does coffee places. But even with newfound friends, will Sam be able to save his skin?

First thoughts/ storyline
I won, Hold Me Closer Necromancer from a giveaway on twitter from @fiercereads, and the book also came signed!!! How cool is that? First off, I knew nothing of this book but the title when I entered. I didn’t expect to win; I just retweeted to spread the world about fierce reads and the giveaway. So when I won I was pretty ecstatic, by this point I still knew nothing about the book except for the title and that I now owned a copy. Once I got the copy in my hands, and read the synopsis, I decided to cheat on my TBR pile and read this right away. It helped that it’s the first day of my spring break and I read it all at once, without any distractions!!! I have to warn you guys that this review will probably be pretty long because I’m finally being a good blogger and writing right after reading, so everything is fresh on my mind. Plus I loved this book so it will probably be a lot of gushing over characters and rants about the story in general!!
Hold me Closer Necromancer is about Sam, a college dropout working at a fast food restaurant. Even though he hates his job at least he has his best friends; Brooke & Ramon with him to pass the time. Their life isn’t grand but at least they know what to expect. All of that changes when Douglas walks into their restaurant and discovers Sam is just like him, a necromancer, and he wants to know how that’s possible because the “council” has no knowledge of him. Sam had no clue he was anything but normal, and finding out he is a necromancer is far from normal. Douglas gives him one option; join him or die. Now, Sam has to deal with a crazy necromancer and the discovery that the world, as he knew it, no longer exist. He discovers that there are more than Necromancers, there’re a whole slew of paranormal being, and he is about to get a crash course in supernatural beings.
Characters
Sam: Is the typical young adult. He has his entire life ahead of him but has no clue what to do in the meantime. He just found out he is a Necromancer but instead of processing this information he has immediately move forward because he only has week to make a major decision. What I loved most about Sam was that he didn’t constantly whine about the bad hand he had been dealt but set out to seek answers. Plus, he is Hilarious and I just loved him.
Ramon: Is Sam’s best friend!!! I loved him!!! He is so loyal and always by Sam’s side through it out. Imagine if you could take all of the qualities you liked in your friends, you combined them, and made the perfect friend. It would be Ramon!
Brooke: Is the third musketeer. She is cute and compact, but don’t let that fool you. She is a little spitfire and will say what’s on her mind. She is not afraid of anyone! I loved how witty she was, and supporting of Sam.
Brid: Is a hybrid that comes into Sam’s life and brings him a little romance. He is the perfect fit for him. She is very sure of herself, she’s a leader and just has witty as the rest of the characters. She has a lot to deal with and they do not meet under the best circumstances but they make the most of it. What I loved most about Brid is that she is a survivor and will do anything for her family (pack). I can’t wait to see more of her in the second book!
Douglas: Is the all and powerful Necromancer, that basically is evil to the core. He is one of the best villains I’ve seen in like YA history, and I loved him for that!! All good stories have a good villain and he was the worst. He does a lot in this book that you have to read to believe.
What I loved about this book is that it was different than anything I’ve read recently, it had a solid storyline, the writing was amazing, it didn’t rely on romance to sell the story, and it was both hilarious and serious. Lish McBride has made my list of favorite authors from this book.

Final Thoughts
Overall, I highly recommend Hold me closer Necromancer to any book loving. I feel like it’s more than a YA novel and that in general everyone will love it! If you’re looking for a new paranormal series than look no further than this book, and if you’re in between books and you love witty characters, great writing and a solid story than Hold me closer Necromancer will be the perfect book.
Also it looks pretty great on a shelf because the cover is amazing!!