Review of Entice By Jessica Shirvington 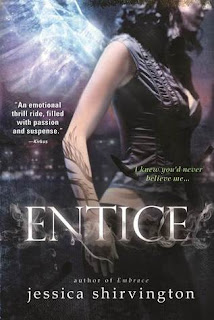 Violet Eden is Grigori - part angel, part human. Her destiny is to protect humans from the vengence of exiled angels. Knowing who to trust is key but, when Grigori reinforcements arrive, it becomes clear everyone is hiding something. Even Lincoln. The only thing Violet does know: Phoenix's hold over her is more dangerous than ever. The race to find the one thing that could tilt the balance of power brings them all to the sacred mountains of Jordan, where Violet's power will be pushed to the extreme. And the ultimate betrayal exposed. Enticed is the second compelling book in The Violet Eden Chapters

Warning if you haven’t read the first book in the series Embrace I would be caution before reading this review. I’ve tried to keep it completely spoiler free, but you never know!

First Thoughts
I really enjoyed Embrace, the first book in the series and was able to read it all in one sitting. After the last sentence of Embrace I knew that I would have to start Entice as soon as possible. Luckily for me, I had won both books earlier so, I was able to finish one and jump straight into the next.

My Thoughts
If you’ve read my review for Embrace, you would know that I loved it, and if you haven’t, you can read it here. Entice starts off exactly were embrace left off. Without giving away to many details Violet has a new task and must continue to try to protect the world from these dangerous exile Angels. After reading this book, I can say I’m a true fan. This series is turning out to be one of my favorites. It’s like both Buffy, Angel, with a teen drama element. Once I finished the last sentence of Entice all I could say was “oh hell, that was amazing, where is the next one.”

Entice Answers a lot of questions that were left unanswered in Embrace, and also brings along some new faces, some friends and some foes.  Violet now has to deal with the consequences of her past choices and make some new decisions that will of course change her future.

Characters: Some of the new characters re Nyla and Rudyard who are Grigori partnered pair, and have a little secret that can change Violet’s outlook on “partners”. Then we have Zoe and Salvatore who were recently partnered together. They have a rocky partnership because Salvatore doesn’t speak much English and Zoe thinks he is dumb, but he will surprise her. Spence is the wild child of the little group. His partner hasn’t reached embracing age, so he is stuck training by himself. No partner means, no missions, but that doesn’t stop him from trying.

We also have the original gang back, Griffin and his partner Magda, Phoenix, and Lincoln. Also there is a new challenge coming their way. They must find the scriptures before the dark side. These Scriptures hold the names of every Grigori, even the ones yet to be born. So if the dark so are able to obtain them the balance will be tipped in their favor.

What I love about this series is that with every new chapter we learn something new about Angels, and their rank, and past lives. It’s a lot to keep up with. Also it’s never stop and go, the pace of the story flowed well and I was never bored. This book contains actions throughout most chapters! It’s not just one epic scene towards the end, its epic fight scenes from beginning to end.