Review for When Lightning Strikes By Brenda Novak 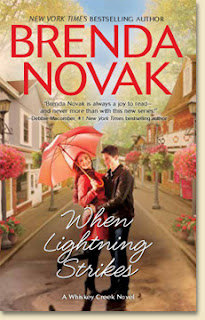 
Simon O'Neal's causing trouble again. And it's up to Gail DeMarco to stop him.Gail DeMarco left Whiskey Creek, California, to make a name for herself in Los Angeles. Her PR firm has accumulated a roster of A-list clients, including the biggest box office hit of all—sexy and unpredictable Simon O'Neal. But Simon, who's just been through a turbulent divorce, is so busy self-destructing he won't listen to anything she says. She drops him from her list—and he retaliates by taking the rest of her clients with him. Desperate to save her company, Gail has to humble herself by making a deal with Simon. The one thing he wants is custody of his son, but that's going to require a whole new image. He needs to marry some squeaky-clean girl who'll drag him off to some small, obscure place like Whiskey Creek…. Gail's the only one he can trust. She agrees to become his wife—reluctantly. But she isn't reluctant because he's too hard to like. It's because he's too hard not to love!

My Thoughts
When Lightning Strike was a cute, fun read!  I’m a big fan on the contemporary romance and that’s what I felt this was. I was expected it to be the usually cliché romance, but it was much more than that. The characters are far from perfect and the story takes you through their journey of love, discovery, and what it takes to get back to the person you want to be.

The main characters are Gail and Simon. Gail is responsible, kind, and the owner of her own PR Company. Simon I the movie star her she has just let go as a client because he was too much of a hassle. But when he left her, he took her clients with him, so now she must figure out how to get her clients back and he must figure out a way to gain custody of his son.

After a misunderstanding with one of her employees the only thing they can think of that will help them both is a marriage of convenience. The courts and world will see him as a responsible, one women man, and a marriage to Hollywood A lister will help her grow her client list again. But it’s not as easy as it seems. They have to convince the world and most importantly her family!

I loved both of the main characters. Simon is the flawed character that on the surface you want to hate him, but once you get to know his reasoning behind his actions you can’t help to love him. Gail is the independent heroine that knows what she wants in life and goes and gets it.  But underneath that tough girl exterior she just wants to be loved, and stay wants show her dad that she has made the right decision by being with Simon.

Not only did I love the main characters I loved all the secondary characters as well.Her brother, whom was going through his own problems, her father that just wanted the best for her.Also all of her friends that looked out for her, and was not shy of voicing their opinion on her relationship.I was raised in the city but I love the small town vibe.The beauty of a small town, everyone knowing everyone, having the good neighbors, and the town get together's. I want to live in a small town!

I also loved that the setting of the story wasn’t in Los Angeles the entire way. We got to see their relationship develop in her small home town of Whiskey Creek. I love when the big city girl returns to small town life.
Overall Great romance! Perfect book to unwind to after a stressful day! This one will not disappoint.