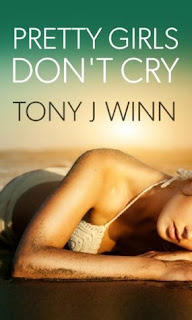 
Afternoon radio show host Nora Scott has always considered herself an ugly duckling, and the prosthetic foot she wears on her right leg isn't helping. When she's on the air, as a faceless voice, she's Eugene, Oregon's favorite personality. Off the air, she's ... not so great, hiding her face and failing to connect with a guy for more than one night. Now she's being pursued by two men, a work friend who wants to be more than friends, and the guy she loved when she was fourteen, before the accident. Nora must figure out what she really wants, as well as how much she can forgive

Thoughts
Pretty Girls Don’t Cry is a story about Nora, radio personality and how she lives her life. She is a 27 year old woman that still lives with her parents. She loves her job, but she feels that she is just pretty enough for radio. She doesn’t like her curly hair, her nose or that she has a prosthetic foot. And because of this she pushes people away, she feel once they figure out that she isn’t perfect or even really pretty they will leave her, so she one ups them and does it first. What I like about Nora is that she is funny, and smart. I found myself laughing out loud at a lot of things she and her friends said.

Nora is getting pursued by two men. One she knows from her pass and another who she has been talking to for months. Aaron is the boy she has known for a while and she is attracted to him but doesn’t know if it’s a good idea to be with him because of their pass. Bobby really seems like the perfect guy. She has fun with him but doesn’t know if he is the right one for her. She has a very difficult decision to make, but before she can make the choice between them she must reevaluate herself, and find out what she really wants in life and who she wants to be.

What I really like about this story was that it wasn’t just a romance. This story was so much more. They had real problems the characters weren’t perfect they were flawed. This story offered some insight on what it’s like to live with a prosthetic foot, and the problems that come with being an adult. I loved they friendship between Nora, Tianne and Kylie. I felt that they had a strong and special bond that grew as new problems surfaced.

Now the one thing I loved about this book, which is how it wasn’t just a romance, I also disliked. If that makes senses. I wanted a little more romance. Not just your average boy meets girl and boom they’re in love. But I felt that the romance was almost none existent only the end. I wanted a little more. Other than that I really enjoyed it and would likely read more from this author.