Interview With Ally Malinenko Author of Lizzy Speare and the Cursed Tomb. 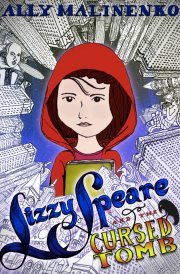 MEET LIZZY SPEARE… …a normal twelve year old girl with a talent for writing, who has a very not normal family secret. And when Lizzy’s father vanishes, that secret will change her life in ways unimagined. (Spoiler Alert! It turns out that Lizzy, or Elizabeth S. Speare, is the last living descendant of William Shakespeare. Shhh! Don’t tell anybody!) Then Lizzy and her best friend Sammy are kidnapped, awakening in the faraway land of Manhattan. Their host is Jonathan Muse, whose job is to protect Lizzy from becoming the latest victim in a family feud nearly five hundred years old. Could that be why the mysterious, eye patch-wearing Dmitri Marlowe is after her? (Spoiler Alert 2—he’s the last living descendant of Christopher Marlowe, a friend and rival of Shakespeare’s. But keep it to yourself!) Is Marlowe after Lizzy’s family fortune rumored to be kept in Shakespeare’s tomb? Does he seek artistic immortality? Or Revenge (with a capital R) for a death long, long ago? In a dangerous game of cat-and-mouse, Lizzy and Sammy are thrust into the realm of the mythical and fantastic—from satyrs and Cyclopses to Middle Eastern cab drivers and Brooklyn hipsters—in what is truly “an improbable fiction” as the Bard himself once wrote.


I had the great Pleasure of Interviewing Ally and here is what she had to say!!

What was your favorite part about writing a novel?
Coming up with the characters and ideas. Creation is always the best part. But it turns out that I’m a little too loose on “plot outlines” which meant that after writing it, I had to rewrite it in order to smash it into something cohesive. That was my least favorite part.

Is there a message in your novel that you want readers to grasp?
Well, I think whatever people take away from the book is what they got out of it and that’s a good thing. But for me, if the book is about anything it’s about love. Especially complicated love.

What books have most influenced your life most?
The books that I read when I was younger – specifically the C.S. Lewis’ Chronicles of Narnia series. I didn’t get all the allegory but I did get MAGIC. And I certainly started to understand that writing was a profession, one that if I worked for, I could also have.  Books like Neverending Story and Bridge to Terabithia and Watership Down were hugely influential. I’ve always been a fan of books that really aim to tell a STORY. I imagine that had I not been so intimidated by the Tolkien books when I was younger, that I would have counted them among my favorites. Unfortunately, they weren’t read till I was older.

What are your current projects?
I’m working on the second Lizzy story which brings her far from New York City into the land of the satyrs and beyond. In this one, we get into some real magic. And I also have a YA book I’m working on that is about street kids, chess, and time travel. Strange combination, I know.

Name one entity that you feel supported you outside of family members?
Oh that’s a good question. I’ll say outside of friends and family, the total strangers on Absolute Write were great and helpful and let me complain when I needed to complain. Otherwise, it would be the stories that I read as a child. The ones that buoyed me up then - still do now. That, and my desire to have something to add to the canon. That will always be a driving influence. I just like to tell stories.

What was the hardest part of writing your book?
See above! No really, I learned what it takes to write a book with this story. And what it takes is a lot of work – mainly editing.  The initial writing is the fun part. You come up with ideas, you play with characters, you create a world. But I’m not so good at planning which means more often than not when it’s finally written it’s a big hot mess. Then I need to poke and prod and push and pull and ram it into a real live story. That’s the hard part.

Do you have any advice for other writers?
Yes. Read. Read. Read. And keep reading. The only way you’ll learn how to write is by reading. After that, once you start, write every day. Write on good days, on bad days, on rainy days, on sunny days when you would rather go outside. Every day. Put something down. And don’t give up. Writing is work but it is amazing rewarding work.

Do you have anything specific that you want to say to your readers?
Yes! I want to say thanks. Thanks so very much. You made this girl’s dream come true.

Here is a fun one! If you could choose one food item, to eat for the rest of your life what would it be?
Okay discounting nutritional content of course, it would have to be coffee ice cream.

Now here is some info on Ally so that you can stalk her... I mean get to know her) 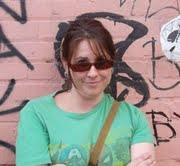 Ally Malinenko, a self-proclaimed Bardolator, took her first pilgrimage to Stratford-Upon-Avon in 2009 and hasn’t been the same since. Lizzy Speare and the Cursed Tomb is her first children's book. Her poetry book, The Wanting Bone, was published by Six Gallery Press. She blogs at allymalinenko.com. Ally lives in Brooklyn with her husband.