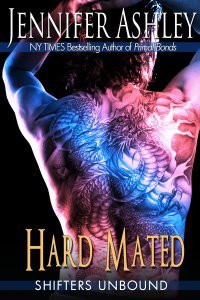 A short novel of the Shifters Unbound series. Spike, a wildcat Shifter and the champion fighter of Shiftertown, is stunned when Myka, the best friend of a dying human woman, announces that Spike has fathered a cub. What's more, the mother is giving the boy to Spike to protect and raise. Myka, who'd been raised by an abusive stepfather, is not sure that a wild fighter named Spike is the best man to bring up the cute little jaguar cub. She goes to Shiftertown to check out Spike, and finds that the man behind the name is a lonely Shifter who's lost most of his family and is a fierce caretaker to those he has left. Spike is torn between the cub and his duties as tracker to the Shiftertown leader, and begs Myka, the only person who understands, to help him. He starts to like the sassy Myka, a horse trainer who's not afraid of working with animals, even if they're wildcats who turn into humans. When Spike's job puts his cub and Myka in danger, Spike is forced to choose between those to whom he's pledged his loyalty and his need to protect the woman and cub he's come to love


P.S this started out as a mini review and then it took a life of it's own! I read this book during Kimba's Fraterfest Read-A-Thon


First Thoughts
I love Jennifer Ashley! I’ve read all of the books in her shifter Unbound series and all of her historical fiction (when I was going through a historical fiction phrase).So I knew without a doubt that I would love this book.

My thoughts
Hard-mated is a “Short Novel” but its 160 pages and it didn’t fell short by any means. The characters were fully developed, they all had back stories and a lot happened thought out the entire story.

Hard-mated is about Spike, a tracker for his shifter community. Spike is a Jaguar shifter. His job is to do what his alpha leader tells him. That means fighting and tracking down enemies. In a place where shifters are forced to wear collars that control everything they do, and makes it where they can’t commit violence and shifters are treated like they are not human therefore second class citizen. They have an undercover ring where they fight each other until the other submits, and Spike is the best fighter there is. What comes with being the best is a group of shifter groupies (human girls who love to sleep with the shifters) and one is named Jillian and she fathered a child with spike unbeknownst to Spike and when she dies he is now in Spikes care, and Myka her best friend comes to help him raise her. Myka dislikes shifters and don’t trust them because of her fast. They have to learn to get along and help raise this little Jaguar cub and survive the mess that is yet to come.

I fell in love with spike from the very beginning. He loved his son Jordan instantly. His number one priority after meeting his son was to protect him. Myka is the perfect friend, she found Spike and got him to meet is son and then decided to stay and help him raise Jordan because of her love for her friend and her son. Together Spike and Myka drive each other crazy, but over time they begin to trust each other and grow to love each other, they make a crazy blended family.

Hard-mate is a great edition to the Shifter Unbound Series! It’s $0.99 and well worth it. If you are new to the series you will love it and for just $0.99 you can become a fan. If you have been a fan hard-mated will not disappoint plus you can catch up on some of the previous mates from the books before. Plus this one is not short on action!

I’m forever a fan of Jennifer Ashley and I will continue to read every book she books out for this series I’m Hooked!