Review of Pack of Lies By Staci Weber & Sara Dailey 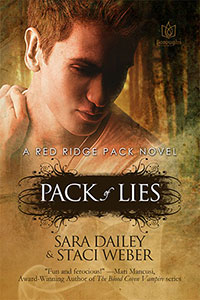 The last thing Allison Wright ever expected when she moved to Red Ridge, New Mexico was to come muzzle to muzzle with the wolf of her dreams. Seventeen-year-old Allison Wright is convinced she’s losing her mind. Uncontrollable mood swings, hot flashes, and the urge to punch anyone who gets in her way are suddenly becoming everyday occurrences. Before her erratic behavior gets out of hand, Allison’s mother finally comes clean about her dark secret. Mom is a werewolf, and soon Allison and her brother Aiden will suffer the same fate. When Allison reaches her breaking point, the family leaves their life in Texas to move to Red Ridge, New Mexico where they rejoin the pack that Allison’s mother left behind almost 20 years ago. Unfortunately, not everyone in Red Ridge is thrilled about Allison’s arrival, especially when she attracts the attention of the very handsome, very taken, soon-to-be alpha, Cade Walker. Little does Allison know, her mere presence is causing a rift in a once unified pack. Not only has Cade been forbidden from being with Allison by his father, the pack’s alpha, Cade’s girlfriend, Kendall Stuart, will stop at nothing to get Allison out of the picture. Well on her way to becoming the next alpha’s mate, Kendall expects to rule the pack by Cade’s side even if it means teaming up with a rogue werewolf with an agenda of his own. Determined to get rid of Allison permanently, when Kendall and the rogue join forces, all hell breaks loose and no one in the pack is safe, especially not Cade and his true mate.

OK, so pack of Lies as all of my favorite elements. An alpha male, check, a werewolf pack, check, and a kick ass heroine, So far this novel was looking pretty promising.

Pack of Lies opens up with some fighting action. I’m not kidding the first line in the book is “Break it up ladies”. Allison The heroine is having a hard time lately. It’s close to her seventeenth birthday and she has no friends to celebrate with. Lately she feels like everyone hates her. She lost her friends and boyfriend and everyone wants to fight her. And just when she doesn’t think life could get any worst her mother tells her and Aiden (her brother) that she is a werewolf and soon they will be too, oh and there’re moving. Now Allison and Aiden are dealing with this new found secret and trying to cope, while in a new environment, with a pack of Wolves.

Alison thought of this as a fresh start but before they can even say hi the girls led my queen bee Kendall hates her and she meets a wolf that makes her pulse jump .She later founds out, that wolf is Cade the alpha’s son and Kendall’s long term boyfriend!! Things are no longer looking up.

I enjoyed this book because of the paranormal aspect and the characters. I think all the character’s played their “roles” perfectly. Aiden was the lovable  protective brother; the parents were just that parents. The villains were horrible and you will hate them. And Allison and Cade were great together. They did annoy me sometimes with their progress and how they tricked each other, but then again they were trying to please everyone.

Only grievance I had with this book was I would have loved it to be longer so that I could have got a better understanding of the character’s and more story before the big action packed climax. But they probably will be built on throughout the series!

Overall, this was a pretty quick and easy read. It has action, romance, and the paranormal feature. I can’t wait to read the follow up Circle of Lies starring Aiden as the main character.

P.S I love the cover how about you guys?