Review This is not a Drill By Beck Mcdowell 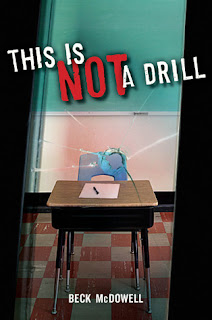 Title: This is not a Drill
Author: Beck Mcdowell
Number of pages: 224
Pub date: Oct.25.2012
Source: Author and I was giving a bookmark..So excited :D
GOODREADS/ AMAZON


Two teens try to save a class of first-graders from a gun-wielding soldier suffering from PTSD When high school seniors Emery and Jake are taken hostage in the classroom where they tutor, they must work together to calm both the terrified children and the gunman threatening them--a task made even more difficult by their recent break-up. Brian Stutts, a soldier suffering from post-traumatic stress disorder after serving in Iraq, uses deadly force when he's denied access to his son because of a custody battle. The children's fate is in the hands of the two teens, each recovering from great loss, who now must reestablish trust in a relationship damaged by betrayal. Told through Emery and Jake's alternating viewpoints, this gripping novel features characters teens will identify with and explores the often-hidden damages of war.

I read the synopsis for the book and was immediately enthralled! Over the course of a couple of months, my brain was actively thinking about reading this book. I book marked the goodreads page (to keep tabs on it), made it my waiting on Wednesday choice like three times, and this was all three months ago people. I begin supporting both author and book and this was all before even reading it.  I got a sense that this would be a book that stayed with me long after I read the last page. And when I got my hands on a copy I hoped it would not disappoint.

Okay, this book had me with so many mixed emotions. The main characters are Emery Austin, a senior girl who is teaching a group of first graders with Willoughby, her Ex-boyfriend. In the middle of one of their lessons a man by the name of Brian Stutts walks in demanding to take his son. flash forward and they think they have the situation under control when the teacher, Ms. Campbell, escorts him to the office.  But, he soon returns with the same demand and things escalate from a normal day, to the worst you can possibly imagine.

What I loved about this book is that the teens had their own story and past and that made them connect with each other and I felt that gave them added support and helped them remain calm.  Also this story was written in both their perspectives and normal I don’t like that in novels but this time it added to the story. Like while one was doing something in the next chapter you could see what the other main character was doing. They had very different voices and that was shown with the dual POV.  Emery also had POTS (Postural orthostatic tachycardia syndrome) so her views were completely different and the feelings she had were different when put in stressful situations.

Later we find out that Brian is struggling with post-traumatic stress from his stints in Irag. So he is not in in right state of mind. I guess Brian is the villain in this story and I’m supposed to hate him but all I could think about was that he was a victim also. Don’t get me wrong holding a group of kid’s hostage with a gun that is ready to shot is wrong. But I can also sympathize with him also, especially after hearing his story.

This is not a Drill had me up in down the entire time. You are constantly asking yourself questions and wondering what will happen next? Could this situation have been prevented? What’s going to happen at the end? And after the story is over how long would this hunt the people involved memories’?

This is a serious book that brings forward a lot of issues that probably go unnoticed. The event wasn’t sugar coated but also wasn’t something that will hunt you and scare you. It was a story of how certain events can change your life, and how not everything is as it seems. It is a YA novel that I think all should read.

So not all is gloominess  We get to see Emery and Jake’s interaction with the young kids, and they are truly remarkable. They thought fast and handled everything in the best way possible. And since kids are a big part of the novel,no matter they situation you will get some funny parts, because let’s face it kids really do say the funniest things.

The only gripe I had was I wasn't ready for it to end I could actually have a couple fuller pages and I would have been even happier.

Overall this was an amazing story! There are some funny moments, some gut wrenching moments, and moments where you a scared and try to predict the outcome, but you just have to keep reading. I highly recommend this novel and I’m so happy I got the chance to read it!!!