Please tell is a little about bit about yourself?
I grew up an ARMY brat and I find I really miss moving every three years.  I despise the heat, which is not good news considering I live in Alabama.  I'm 5'6 1/2" but I will forever claim I'm 5'7".  I love the ocean and can't figure out why I don't live by it yet.  I like to teach all the dogs I own sign language.  I love reading and my favorite place to do that is in the tub by candlelight.

How did you begin writing? Did you intend to become an author, or do you have a specific reason or reasons for writing each book?
When I was in my late teens I discovered fanfiction, but my reading standards were a little high and none of the fanfiction I came across satisfied the reader in me, so I decided to write my own.  I had a lot of fun with it and they were really well received; some even won awards.  After that, I was hooked and slowly made my way out of fanfiction and into my own characters.  I never intended on becoming an author until I was probably twenty or twenty-one.  I got my degree in Criminal Justice and I had plans to join the FBI or become a Private Investigator.  I suppose those are backups now because I would really like to see how far this author thing could go.

What is your favorite part about being a writer?
Creating people I wish existed.  I love creating characters and being the puppet master of their lives.  In a world where you control so few things, it's comforting to know you can control what you write.

Are the experiences based on someone you know, or events in your own life?
Yes, in both of my novels.  I love writing things that have happened and either rewriting the dialogue, or rewriting the ending.

How much research went into your characters?
A fair amount, some characters more than others.  A couple required none at all because I already had them planned out in my head.  Others though took several Google searches.  I think Lot took the most research.  He an Irish Elemental so I had a little work cut out for me there.  I hope people like Lot; he's going to have a huge part in the sequel!

What genre would you consider your book?  YA Fantasy/Romance.

What are your current projects?
There's too many!  I'm writing the sequel to SHADOWLESS, but I also have a YA thriller, two YA mysteries and a book of short stories in the works.  My mind just won't be quiet.

Name one entity that you feel supported you outside of family members?
My boyfriend.  We met after I finished the first draft of SHADOWLESS and he supported me like crazy during the rewrite and the editing.  Whenever I felt like it wasn't good enough or if I'm having a bad writing-related day (or bad day in general) he's always there for me.  He's a keeper, that one. (Aww)

Who are your favorite author and what is it that really strikes you about their work?
Oh no, I hate picking favorites!  I think I'll go with Alice Hoffman.  I love everything I've read by her.  PRACTICAL MAGIC is one of my favorite books.  I love the way she writes, I love how I get lost in her worlds.  I also admire authors that can write different genres.  Some of her work is in the YA section and others are in the Adult section.  I don't know why I love that so much about authors, but I do.

Do you have any advice for other writers?
Write and read all the time.  I'm sure that sounds like a broken record, but it's so true.  When you read, you get a feel for how things flow and what hooks readers.  Reading makes you a better writer.  And keep writing.  It can be frustrating sometimes with competition and writers' block, but hang in there!

Early Riser or Night Owl?
Night Owl, 100%.  I'm almost always up until 3 or 4 a.m.  I haven't been to bed before midnight in years.
( We are basically the same person!! Midnight is still early to me lol!!

Winter or Summer?
Winter.  I don't like the heat.  Summer in Alabama is torture with the heat and the humidity.  I definitely think I'm secretly a West Coast girl.  Seattle, anyone?
( I hate the summer!! Texas heat in the summer is unbearable!!  I love the winter)

If you could have dinner with one person, dead or alive, who would it be and why?  Betty White.  I love that lady.  She's funny, talented, a smart-aleck and I love the work she's done with and for animals.  She just seems like an amazing person and I would love to have dinner (and drinks!) with her.

Sell your book in a tweet!(120 characters)  A stolen soul, supernatural roommates, and a blooming romance.  SHADOWLESS is a delightful mix of romance, humor and dark twists. 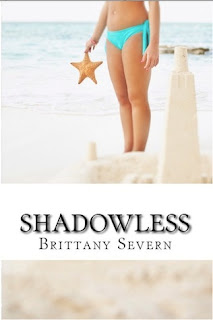 All Quinn Murdock wants is to get her soul back. With no shadow and no reflection, life in a small beach town poses its risks. Her supernatural roommates try to keep her feet on the ground, but they also keep her head spinning. When a human named Conrad Archer moves in, the mystery of Quinn's stolen soul grows deeper as does her affection for him. But when a conflict arises among the roommates, Quinn realizes they all might be more dangerous than she had originally thought