Review of Circle Of Lies By Sara Dailey & Staci Weber 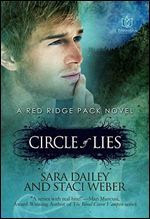 Aiden Wright is trying to figure out who he really is, but the truth could cost him his true mate—or his life. Life has always been easy for Aiden Wright. He’s smart, athletic, funny, and the ladies adore him. But when tragedy strikes, Aiden discovers the truth about who he really is and his whole world comes crashing down around him. Aiden thought that being a teenage werewolf was going to be awesome, but it might just cost him the one girl who could make him whole. Since her mother’s disappearance, Teagan Rhodes’s life has been littered with her father’s empty beer cans and his hollow promises to change. Convinced that others would only let her down, she keeps everyone at arm’s length—but resisting Aiden’s charm is proving to be more difficult than she thought. Throw in a psychotic werewolf hunter out to terminate the species and one wrong move, one wrong decision could destroy everything

I read Pack of lies and really enjoyed it, so of course I was going to pick up the sequel Circle of Lies.
This book has everything I looked forward to after the conclusion of the first book, romance, werewolves, mystery, and the chance for me to get a deeper glimpse into the characters’ lives.

Circle of lies shadows Aiden after the drama of the first novel. He’s had to move to another place, meet new friends, and discovered that his entire life was basically a lie. He’s a werewolf and his parents are not who they seem to be. Aiden is overly cocky and a completely swoon worthy guy. Sometimes he ticked me off completely, and then reminded me why I like him again. Not my favorite male hero, but definitely now where close to least liked. All of that changes when he notices Teagan, his sister’s human friend. Humans and werewolf’s don’t mix, especially if you are the son of an alpha, you have obligations to your pack!
Teagan is my favorite character!! I loved her in Pack of lies and my love only grows for her in this book.  She is the relatable character. She has the troubled past that has made her standoffish and very reserved. She keeps people at arm’s length and likes it that way. Aiden coming into her life was not planned but now she is changing her way of thinking, and allowing others in. I just love her! She’s the girl you root for in the end, the one you want to have the happier ever after.

Don’t think for one second that this story isn’t jammed packed with as much action, love, lies, and adventure as its predecessor, because it is. The pack has a new situation to handle and that is peter, a human out for blood, the blood of werewolves. He’s had a troubled life and to him werewolves are the cause of all of his problems and heartaches.

Aiden and Teagan are trying to balance this attraction towards each other and the threat to the pack. Life is never dull in Red ridge New Mexico.

Overall, Circle of lies was a great continuation to a promising series and never once let me down. I got to catch up with some of my old favorites; I got to learn more about some new characters, and got enough action to tide me over until the third book!