Review of Moonstone By Marilee Brohters 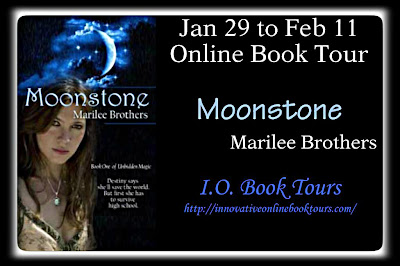 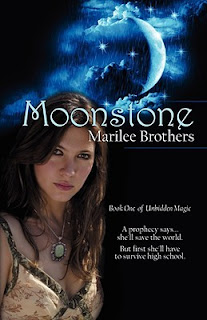 Allie Emerson is the girl voted least likely to save the world. At Peacock Flats High she can barely handle the bullies and drama queens; her mom's a loser and Dad's a no-show; so when an elderly neighbor gives her a magical moonstone necklace and strange thing start to happen, Allie can't quite believe she's meant to battle the nasty Trimarks of the world

First Thoughts
I am always eager to read a YA book that has a paranormal element to it. So when I read about Allie in the blurb, with her crazy psychic powers, and this stone, and prophecy, I know that I had to read it.

My thoughts
Moonstone is the first in a series of five books.  This story follows Alfrieda Carlotta Emerson or Allie as she is known as. Allie is a 15 year old girl who is living a somewhat hard life with her sickly mother. Her life consists of living in poverty, in a trailer on the back, on her Uncle’s land. She has not had the easiest life, and it’s about to get that much for complicated!!

Allie is just adjusting the TV antenna when she is suddenly sent falling to the ground and an electric fence.  She now has physic powers and is the keeper of the light. I battle between good and evil, demon and fairies is brewing and she has to make sure the light wins. The fight won’t be easy because the Trimarks will put up a fight.

Moonstone was a good introduction to for me to a new world and likeable characters. One thing I liked about this story was the characters! They might not be all that likable, but they are very relatable. They are dealing with realistic problems. Allie has the typical teen issues like drama, new boys, being poor, having to take care of her mother, and having a dad that is not in her life.

Overall, Moonstone was a good first book. Like all first books in a series it was slow, and didn’t pick up until the end. The reason for that is because you have to be introductions to the characters, this new world, and the overall basis for the action that is yet to come. It was humorous, entertaining, and packed a wallop of information to grip.

My only hiccup with Moonstone was that I was able to predict certain things about the story, and that yes it was not completely unique. It followed the typical YA formula.

I look forward to the next adventure Allie has to face and what is yet to come between her and Junior.