Today on the blog I have an interview and Giveaway with Author Robert Jacoby!!

I hope you guys enjoy, because I enjoyed reading his responses!! 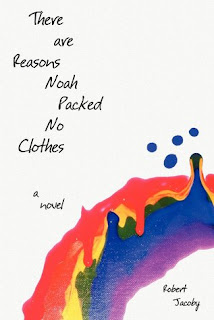 Please tell us a little about bit about yourself.

My usual bio begins: “Robert Jacoby is a poet, novelist, memoirist, and diarist.” To pay the bills, though, I work as a Web content manager. I recently completed a Master of Information Management degree at the University of Maryland, College Park, where my interests and research focused on website management and governance issues. My capstone project was the WebsiteGovernance Modeling Tool . A few of my articles have been published by the online journal CMSWire . I’m also a Wikipedian, and I’ve created some articles around website governance and management topics. You can see them all on my Wikipedia user page.to  For my creative work you can always visit robert-jacoby.com.  Or stop by my Goodreads page to read my book reviews or blog posts or reviews of my books, or just to say hello.

How did you begin writing? Did you intend to become an author, or do you have a specific reason or reasons for writing each book?

I began in fits and starts, at an early age, and through high school. Writing for me is a way of life now. I’ve kept notebooks for nearly 30 years and, by my estimate, I’ve written about 900,000 words in them. That’s 9 or 10 books right there.
That's crazy!!! I wish I keep a notebook. It would be great to reflect on my life and writing over the years!!

Each of my book projects has its own reasons for being, yes. In 2011 I published a nonfiction book (Escapingfrom Reality Without Really Trying), and in 2012 I published my debut novel (Thereare Reasons Noah Packed No Clothes). The nonfiction book came about because of an opportunity to interview a retiring merchant seaman. I figured there might be some people who would really get a kick out of this guy’s off-the-wall stories. The idea for the novel I had with me for more than 10 years, gestating, before I sat down to begin work on it. I have ideas for future books that I may never get to develop fully, unfortunately. The time is short and the projects are many.

What is your favorite part about being a writer?

Being. Doing. Observing, imagining, and making words do things that can cause someone to stop and wonder about themselves and the world when they read things I've written in my fiction or in my poetry, like StarsFall Nude, DearLove  or Whenyou are in your moon and I am in my sun.

Are the experiences based on someone you know, or events in your own life?

Every writer draws on real experiences. Let’s just say that the experiences in Noah could be said to be “based on true events”.

How much research went into your characters?

It was more observation of human nature than research. I did make phone calls to talk to people who had experiences in matters that were relevant to the story, and where I needed help with specifics. But a writer, I think, can find all the material he needs by watching and listening to people. We’re a curious lot, humans.

This book is very thought out and every character unique in a very different environment that you normally don’t see, how difficult was it to write this book, and or characters?

That’s a good observation and a good way to phrase it. It is a “very thought out” book. It’s a very carefully written book. I worked very hard on it, sometimes to the point of tears. The writing and the revisions took a very long time to complete. There was a point where I was “sweeping” the book, from page 1 to the end, over and over again, reading not merely to read but searching for words, how words were being used, in context and throughout the book. I remember at one point I had a sheet that had words on it and how many times they each appeared in the book, and I’d go through my review questioning each use of a word, did it fit, was it the right word in this context, did it describe what I wanted it to describe, that sort of thing. For one revision I read the book backwards, from the last sentence on the last page to the first sentence on the first page. It took days! But it gave me new insight into the story and the characters.

There are Reasons Noah Packed No Clothes is my first novel. I’d written short stories before, and I always had the idea of writing a novel, but thinking about something and setting out to do something are two entirely different matters. I think the experience of writing short stories helped prepare me for a novel. But I suppose (like all first novels) it was “difficult” because it was the first for me, technically, even “mechanically” speaking.

The story and the characters presented their own difficulties. There were times I was writing the book that were extremely … challenging. Not just in the story, but in life.

What genre would you consider your book?

It’s literary fiction. But it’s also a coming of age story, so, in a sense, it’s for young adults and mature teens, too.

What are your current projects?

Over the last year I wasn’t able to read much of what I wanted to because of schoolwork and then working on Noah, so I’m catching up on what I enjoy reading and reviewing (on Amazon and Goodreads). But writing projects are always nearby.

A second novel is in the works now. In 2010 and 2011 I worked on (and mostly completed) another nonfiction book—now titled Never Stop Dancing—a memoir (by interview) of a friend who lost his wife in a pedestrian traffic accident in Washington, D.C. in April 2010, and the aftermath and recovery with his two young sons (visit his online journey at his blog) . And I’ve been working on my first book of poetry for a few years. As more poems are written and re-written and finally published, I keep swapping and re-arranging and re-titling. I think the current title is When I told you I was thinking about nothing, I lied. That’s the title of a newer (and still unpublished) poem, too.
You can learn more about these projects at robert-jacoby.com.

Name one entity that you feel supported you outside of family members?
God.

Who are your favorite authors and what is it that really strikes you about their work?

Favorites in the modern age that come immediately to mind include William Goyen, Flannery O’Connor, Cormac McCarthy, Joseph Conrad, David Plante, John Gardner, and Don DeLillo. It’s the skill with words—the use of language—that I appreciate and admire in each one, and the power of their stories and their narratives. The poet Dylan Thomas is someone whose work I admire greatly, too. I keep a volume of his poems on a shelf near my desk, and I’ll pull it down whenever I need to be reminded of what language can do.

I love the cover of this book, how did you come up with the design?

Thank you! I think it expresses the story in a unique way, too.

At first I wanted to capture a specific scene from the novel, when the group of boys was going out for the day. I had an image of Richard standing on the cliff and looking out over the lake. I saw early work from the designers, and it wasn’t working for me in a couple of versions we tried, so I switched to a more abstract concept to convey an idea of what the book is about: a rainbow.

The connection to the Noah of the Bible is clear, as were notions of redemption, saving, forgiveness, grace, and love. Those were important themes to me. I also wanted to play with the colors red and blue, which are prominent in the novel, as blood (life and death) and water (baptism as a changing event: the pond, the lake, the rain). And there’s a scene in the book where an abstract painting hanging on one of the walls in the institution comes into play. So those things were all working in my mind. The back cover reflects the finger painting drawing that Richard’s mother brings to him when he’s in Isolation. Kimberly Leonard (the designer) had some nice touches there; she did a remarkable job.

Do you have any advice for other writers?

All the best advice has been given.

Sell your book in a tweet!(120 characters)
I’m not very good at selling. Can you try?

Here is my try: There are reason Noah Packed no Clothes is a coming of are story that will draw you in and won't release you until the very end!! #bookpitch

Giveaway
One lucky person will win a Copy of Robert Jacoby's Book "There are reasons Noah Packed No clothes"
Good Luck, and May the odds be ever in your favor!!!