Review for Moonrise By Marilee Brothers 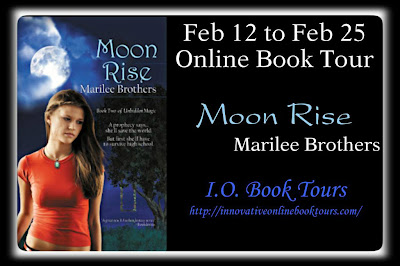 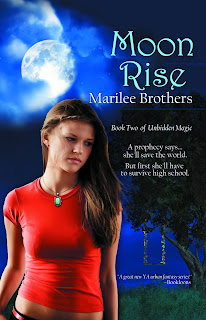 
Her mom's still dating losers. Her boyfriend's gone back to Mexico. Dad still hasn't told his wife and kids that she exists. At school, the drama queens and bullies still rule. But worst of all for Allie Emerson--aka the Star Seeker of an old Gypsy prophecy--is that her powers have taken a hike. She can't read minds anymore. She can't move stuff just by looking at it. The other Star Seekers are counting on her psychic gifts more than ever, and the evil Tri-marks are closing in, eager to snatch her magic moonstone necklace while she's helpless. The hot new guy at school is ready and willing to fight her battles, but he comes with some wicked baggage. Dear Diary: I'm a little worried. My new BF is a demon. Welcome again to Allie Emerson's funny, scary, amazing, and always unpredictable life, as the girl voted least likely to save the world from evil.

After reading Moonstone I was really looking forward to its sequel! The first book was slow, and even though I like it I hoped that the second book with be better!

My thoughts
Moon Rise picks up right where Moonstone left off! In Moon rise a lot happens, I mean a lot, people! We are introduced to new characters, some old characters leave, more secrets and history are revealed, along with more twist and turns.

In Moon Rise Allie is still not having a great life. Her mom is dating a loser, whom Allie has the greatest nickname for. Junior (love interest from moonstone) is in Mexico, and it’s really no telling if he will be back on our pages anytime soon. There are a couple of new faces that make an appearance in this book, and those are Beck and Nicole. They are twins; they have powers themselves, and are big parts in this chapter of Allie’s life.

After learning that Junior would not be a fixture in this book, and me thinking of the YA formula I knew there had to be a love interest and that came in the form of Beck! He is the hot bad boy, whom I took a strong liking to.

One thing that I loved about Moon Rise is the story itself! It moves at a great pace, one that leaves not one dull moment, you will be entertained from page one until the last past of this book. Also, there are enough secrets and twist that had me looking forward to the rest of the series.

Allie as a character has really grown since the first books!  In the first book everything was new, and it’s a lot to take in that there is a prophecy that involves you and that you are a big part in the fight against good and evil, and that the Star Keepers are counting on you to defeat the Trimarks. Allie has no embraced this and now more of her true personality can come out, which I already loved!!

That by no means states that everything is going to be better for Allie! The Trimarks are back and there is a second prophecy! For Allie being a normal girl will never happen, not when you have powers and the evil doers are out to get you.

Overall, Moonrise to me was so much better than Moonstone! It was a promising sequel and it makes me want to hop right into the third book!!!