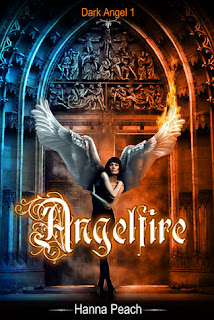 An army of angels walk among us. They have kept us safe and ignorant, so far. Earthbound for centuries and ruled by the Elders, they have established hidden cities, a society and The Code: obey your Elders, kill all demons, eliminate Rogue-angels, protect the mortals, remain hidden. Their warriors are the ungifted earthborn angels armed with blades and the ‘borrowed magics’ of distilled angel-blood tattoos. Alyxandria is a young warrior with a fondness for customized knives and illegal night-races. If only she could overcome the taint of her parents who abandoned her to become Rogues. When Alyx saves Israel, a gifted mortal with a past, she is forbidden to see him again. But she can’t help herself, drawn to him through their Guardian-bond, an ancient and long-forgotten bond; if he dies, she dies. An encounter with a handsome Rogue leaves Alyx questioning all she has been taught to believe. Alyx begins to dig into the Elders’ secrets. Two thousand years of secrets that begin with the death of the Archangel Raphael. She is not prepared when she uncovers an Elder’s dark plan. Somewhere on earth is a key to unlock hell. Somewhere on earth are pieces of an amulet that controls Lucifer and his army. Somehow Israel is the link and now both sides are after him. Who can Alyx trust when Good and Evil is no longer clear? The war for earth begins.

This was a question I heard often, especially during the last year of the four year marathon that was writing Angelfire.

When is a work done? I wondered. As a writer, do you reach a point when, like a sign from God, a divine light shines down over you and your work to signal the end? Or do you just get to the point when you can't stand to look at another word, when your eyes blur and the ink bleeds across the screen and you slam your fists against the keyboard crying, "Enough!"?

In July of this year I had finished Angelfire, my first book in the Dark Angel series (back then this was only a trilogy). There was no tickertape, no blaze of glory, not even a fed-up slamming of the laptop. It was quite anticlimactic really. I sent the manuscript out to my beta-readers. And waited.

Hang on, let me just correct myself… I thought I had finished.

I thought I had finished but I hadn’t... there were more handkerchiefs within me. Over a 36 hours period where I had very little sleep these handkerchiefs tumbled out. It started as a single handkerchief then in a flurry of magic the story extended and the handkerchiefs kept coming until there were 6 planned novels instead of 3.

“Hold everything,” I screeched at my beta readers. “Stop!”

I took back my manuscript and spent another 2 months rewriting parts of Book 1 and reweaving these tardy handkerchiefs into the plan for the rest of the series. When I wrote the last word there were still no trumpets or glowing spotlights, but this time there was a sense of closure, of satisfaction. This time it 'felt' finished and I felt empty of handkerchiefs.

Me(Crystal) :I loved reading this guest post! I always wanted to know how Authors decide when there work is finish, as I read I can't even grasp the concept of someone being able to sit down and write an entire novel. I bow down to authors!!

Enjoy this Excerpt from Angelfire
“This is going to sound crazy.” She presses her palm to her forehead.

He laughs softly. “Remember who you’re talking too.”

“Right,” she says. “I think it’s time I admitted some things to you. But you have to promise not to freak out or get angry before I finish, okay?”

“Remember the last time we met, you asked me how I happened to come by the alley in time to save your life…”

Alyx takes a deep breath - no turning back now - and begins to tell him about her visions of him. Then to prove she isn’t lying she describes each one.

“Let me get this straight,” he says. “You see things through my eyes?”

“Essentially, yes. That’s how I knew where to find you then. And tonight.”

“Do you hear my thoughts as well?”

“Just whatever thoughts you have at the time.”

Her mouth parts as she sucks in air, realizing that she has been holding her breath. “You think so?”

“Think about it Alyx. You have been inside my body, felt my heart beating as if it were your own, felt how I feel, thought as I thought. You know what it’s like for me.” He leans forward as he speaks, grabbing her hands. “You don’t just know me, you know me.”

Alyx swallows, hard. His eyes have a way of making her feel like she is underdressed. Alyx wonders for a moment whether he can see inside her as she does him.

Me: Intrigued Yet? If not, Here is the book Trailer!! 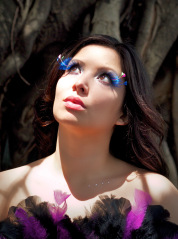 Hanna Peach: A writer of fantastical things, especially stories with fangs, magic or wings. I want to tell you tales that will rip away the glamour from your life, keep you running and fighting and gasping long past the devil’s hour and maybe, just maybe, reality will look a little bit different when you return. Sit with me around this witchlight. Let me tell you a story.


Tell me what you think in the comment section! Also Angelfire is just $0.99