Review for Embrace by Jessica Shirvington 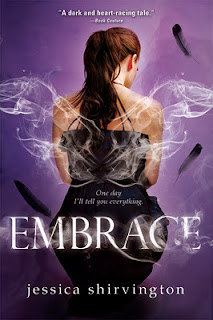 It starts with a whisper: “It’s time for you to know who you are…” Violet Eden dreads her seventeenth birthday. After all, it’s hard to get too excited about the day that marks the anniversary of your mother’s death. As if that wasn’t enough, disturbing dreams haunt her sleep and leave her with very real injuries. There’s a dark tattoo weaving its way up her arms that wasn’t there before. Violet is determined to get some answers, but nothing could have prepared her for the truth. The guy she thought she could fall in love with has been keeping his identity a secret: he’s only half-human—oh, and same goes for her. A centuries-old battle between fallen angels and the protectors of humanity has chosen its new warrior. It’s a fight Violet doesn’t want, but she lives her life by two rules: don’t run and don’t quit. When angels seek vengeance and humans are the warriors, you could do a lot worse than betting on Violet Eden…

Embrace sold me at Angels and I knew I would just love it! So everything else about this book was just an added bonus.

My thoughts
Embrace was soooo good!!! How had I not read this before now? I loved it. Embrace is about a girl named Violet who upon her seventeenth birthday receives a letter from her deceased mother that states she will have a big decision she will have to make soon, and to let her heart guide her, and a bunch of other stuff. This letter makes no sense to Violet but on the day of her birthday things go from crazy, too bad, to bizarre, to this is not good. Because Violet discovers that she is a Grigori. So basically she is a human with the essence of an Angel and her job is to protect the earth from exiled angels. That’s a lot to take in, and she doesn’t know if she can accept it. Only she can decide if this is the life she wants to live and she must do as her mother states, let her heart guide her.

The characters are all so great!! They all add a little something to the novel.

Violet is a very relatable character. She is strong, and witty, but also the typical teen. When I think of her I think Buffy. They are both kickass and have to fight for their lives every day. Plus the whole love triangle thing.
Lincoln is the other main character and he is also a Grigori and her partner. He is one of her best friends and has been there before she found out about these other realms.  Lincoln is also her kickboxing partner and secretly he has been training her for what’s to come. He is a lovely person. You can tell that her really cares for violet and only wants the best for her. He’s so sweet but than can be so badass!

Phoenix is a mystery. I compare him to Damon from Vampire diaries. He’s the bad boy you know is evil, yet you want him, and you try to find some good in him to justify for your liking him. Also he is hot as sin!!
Steph is her best friend from school. She is the one that keeps Violet from being just plain and boring. She makes sure Violet gets some fun time. Steph is the perfect best friend.

Other characters are Magna and Griffin and they are also Grigori and they make up a big part in the book.
I really don’t want to tell you more about what happens in the book because I feel that this book has a lot to take in, and anything else I give away will just be spoiler filled. So I’m just going to tell you some reason I loved this book. First off, the world building is A-mazing, and on every page I feel as though I’m learning something new about this Angel realm. You learn about the different strengths and powers each angel has, the angel hierarchy, and just a really in-depth understanding of these species. The back stories and character development is INSANE! I feel like it was so much information I had to take notes.  So glad this is going to be a new series on the CW because I am sold!!

My only dislike for this book was my hate for love triangles!! I fell like they are totally over done, but I will say that this was my favorite one for the simple reason   that this book actually had me on the fence and I didn’t know what team I wanted to be on. So I say that’s a plus, because some triangles are one sided, and then some are done were you know which one will be picked, but this one was very well written. Very unpredictable!

Overall, I love Embrace!!!!!!!!  I hope you can figure out how much I loved it by my use of exclamation marks, haha. This is going to be one awesome book series and TV show (if it’s done right). If you’re into strong heroines, Angels, kickass fight scenes, dreamy/swoon worthy heroes and villains then you should have read embrace, like yesterday!

Review for Entice the second book in the series to come monday!!