Interview with John Brebbia author of In The War Zone

Today I am interviewing Author of In the War Zone By John Brebbia!

Please tell us a little about bit about yourself?
I grew up in Brookline, Massachusetts, attended public schools there and went on to Stonehill College and Boston College Law School. For the past 25 years I’ve been a member of Lefty Salazar & Associates, a local writers’ group whose members have published a number of works of fiction and nonfiction and whose motto is: “We don’t take incoming phone calls!” In the late 1950s at the height of the Cold War, I served as an Army prosecutor in Verdun, France.

After completing my military service, I moved to Washington, D.C. where I was a Trial Attorney at the Federal Trade Commission and then a managing partner at Alston & Bird, a prestigious national corporate law firm, headquartered in Atlanta, Georgia. While practicing in Washington, I served as a member of the President’s Commission on White House Fellowships, before relocating to Las Vegas as president of a bank holding company and vice-chairman of its subsidiary bank.

Later, I became an entrepreneur and private practitioner. Among my civic activities, I was chairman of the Nevada Humanities Committee; vice chairman of the Governor’s Advisory Council on Education Relating to the Holocaust; a member of the boards of the Nevada Commission on Cultural Affairs, public radio station KNPR and the Federation of State Humanities Councils. Additional information about my writings and me is available on my Website: www.johnhenrybrebbia.com, and on my Amazon author’s page.

What is your favorite part about being a writer?
The challenge of creating believable characters that sometimes are bigger than life, but hopefully believable. And perhaps, partly, because as the famous drama coach Stella Adler once observed: “Life beats down and crushes the soul, and art reminds you that you have one.” Besides, this is the closest I’ll ever come to being a professional actor, which but for my Irish mother’s insistence that I become a professional man, was the path I would have followed. My acting career ended with the final curtain call of George Washington Slept Here, the play in which, during my senior year at Stonehill College, I had the lead role.

Do you ever experience writer's block?
Can’t say that I have, although this may be put to the test when dealing with the sequel to In The War Zone.

What is your favorite place to write?
At home at my desk. However, in the case of both novels, I found myself at all hours of the day and night creating story lines and dialog in my head while showering, while walking, while driving, while listening to music and, unfortunately, sometimes even when engaged in conversation with others. The trick is to remember these random thoughts until pen and paper are handy.

Do you write an outline before every book you write? Like what came first the characters or the story/world?
In terms of fiction writing, I’ve never bothered with an outline. In the case of APO 123, I had an oversees Army command full of stereotypes to choose from and Mr. Roberts and Catch-22 and M*A*S*H to guide me. In the case of In The War Zone, it was the story/world.

Are the experiences based on someone you know, or events in your own life?
My first novel−APO 123−(published with CreateSpace in 2010), which took me 30 years to finish, was based on my experiences as a first lieutenant in the US Army Judge Advocate General’s Corps when serving as a prosecutor in a logistics command, located in rural, historic Verdun, France and populated by a wild bunch of Cold War warriors whose behavior on and off duty made them better suited for employment by a military circus. I couldn’t get out of my head stories that were so different from the conventional experiences of my JAG School classmates. I felt an overriding desire to preserve them for friends and family. During my tour of duty, I was in the habit of circulating to my JAG classmates and friends and relatives reports in the form of stream of consciousness letters entitled “Paris After Dark,” describing those experiences on and off duty. Fortunately, my best friend from law school kept the ones I had written to him. Those letters were used to refresh my memory and made it a lot easier to put pen to paper.

My second novel−In The War Zone−an unconventional contemporary love story with a surprise ending (published with CreateSpace in February 2012.) is a work of pure invention on my part. However, the protagonist’s descriptions of Las Vegas manners and mores are based on my many years of experience living in this unique environment. I learned a lot about the manners and mores of natives in New England small towns while growing up in the Boston area and later on when vacationing on Cape Cod.

What book are you reading now?
Tom Clancy’s Dead or Alive.

What are your current projects?
I’m working with a Hollywood TV series syndicator, a Hollywood scriptwriter, my son, Christian Brebbia, (Yale, NYU film school), and godson Stephan Bataillard, a Hollywood producer, to develop APO 123 into a TV series. Separately, Christian, Stephan and I have in development a feature film entitled Teeth, based on a screenplay co-written by Christian and me. Teeth is a zany comedy/satire about a pair of self-righteous, world class, bigots who move from ethnically challenged Camden, New Jersey to Los Angeles in search of a peaceful place to set up an orthodontic practice, only to flee LA for the lure of the sweet life they are certain awaits them in the "Old South." Their plans are derailed when their moving van driver abandons them in a tiny town in the Texas Panhandle. Instead of finding peace of mind, they manage to incite a war among the KKK, a congregation of black Presbyterians, a moonshining segregationist sheriff, a corporate raiding party led by a Jewish Napoleon, and the US Treasury Department.  Stay tuned!

Name one entity that you feel supported you outside of family members?
John Henry Irsfeld−a published, very accomplished author−founding member of our Lefty Salazar & Associates writer’s group−former longtime chair of the University of Nevada, Las Vegas-English Department/creative writing professor−mentor and all around good guy who offered me continuous encouragement and kept me from giving up.

Who is your favorite author and what is it that really strikes you about their work?
Ernest Hemingway, hands down. I subscribe to his theory that much of the story resides beneath the surface, making room for the readers to read into the characters actions/motivations what they will. I also subscribe to the use of simple declarative statements, the best and most famous example of this writing style being The Sun Also Rises.

Fun questions
Early Riser or Night Owl?
Depends on what you call early. Usually, I’m at the computer between 7:00 am−7:30 am (a lot earlier than when I was a lawyer or banker) and quit writing by 6:00 pm. In my experience, early morning writing is the least bumpy.

Winter or Summer?
If you mean, which season do I prefer−summer, for sure, which is why I have been hiding out in the desert lo these many years.

Random thoughts.
So far the comments from readers have been favorable, including these encouraging words from a successful, long time Hollywood screenwriter who, to the best of my knowledge, is not in the habit of writing book reviews: “I just finished ‘In The War Zone.’ A big deal for me to finish any book in one day – so that says a lot. I really liked your caustic humor – and dead on portrayals of both sides of the tracks in Fairfield County – where I grew up. More importantly, from a writer’s standpoint, I truly liked your ‘voice’ throughout the novel. And that voice also has enormous compassion and empathy in it. A perfect combination, and all the tonalities work well together.”

Later, in response to the comment excerpted from the December 2012 edition of the Portland Book Review that, “This book keeps you reading long after bedtime not because of suspense or fast action, but because of the desire to see the outcome of these characters’ lives”, the same screenwriter offered the following additional assessment: “I have never, ever read as flattering a review, and the quote above is the highest form of flattery, as you know. It's the goal, the grail, the dream of all writers to communicate at this level.”
Here is In the War zone 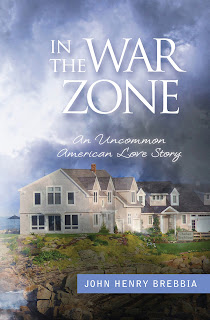 I really enjoyed reading the responses from John and about both his life and his work! I thank him for doing this e-interview!