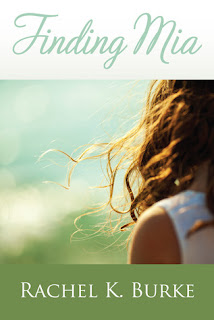 Intelligent and fiercely independent, sixteen-year-old Mia Marchette has never had a childhood. After her father’s disappearance when she was six, she has alone borne the burden of her mother’s bipolar disorder. When her mother is institutionalized after a failed suicide attempt, Mia is abruptly forced to live with the estranged father she has not known for ten years. She is shocked to discover that he has created a new, picture-perfect life for himself, and is now living with a stepmother and a half-sister Mia never knew she had. Together, Mia and her new family must face the bitterness, mistakes, and long-hidden secrets that threaten to destroy their precarious happiness. Finding Mia follows Mia's journey as she searches to find the unanswered questions from her past, leading to her own self-discovery. Ultimately, this is a story of confronting pain and finding freedom, of letting go and learning to search for love in unexpected places

First thoughts
First that blurb pulled me right in. Just from reading it, I knew that I would enjoy it! What I didn’t know was that I would love it!!

My thoughts
Finding Mia is a story about a sixteen year old girl named Mia, whom is living with her mother who is bipolar. She has always had to take care of herself.  Her father ran off when she was six, and since then she lives for the day when her mother has good days.  Even though her life it’s perfect it was the only one she knew, so she learned to deal with it, and to take every day as it was. One day she comes home from school to find her mother unconscious after a failed suicide attempt. After calling the police and getting her mother to the hospital she is immediately told that she is to be reunited with her estranged father, whom has started a new life, because her mother will be hospitalized. Now Mia must become accustomed to this new life, while also dealing with the normal teenage problems.

The characters: First you have Mia and you will love her instantly. She is so strong. She had to grow up so fast. She had an absent father, and a sick mother. Through her journal entries you can try to grasp all that she had to go through, but you really can’t imagine how she was able to do all of this and still remain sane. I think she is the first main character that I’ve read in a while that I loved everything about their personality.

Keith (mia’s father) was a character that kind of had me in emotional tug-a-war. Sometimes I wanted to hug him because it can’t be hard to watch the person you love, turn into someone else. But then I’m like he abandoned his hid. Luckily he grew on me.

Suzanne (mia’s step mother) was perfect to me. I loved her character. She was everything a teenager needs. She was strict when she needed to be, always loving, and the shoulder to cry on when the day just became too much.

Then we have Gretchen. Mia’s best friend she also was a great character. She also had absent parents and was beyond her years when it came to wisdom. She was always there for Gretchen and I think you couldn’t have asked for a better friend. This book was also had a slew of other characters that rounded this story, and every one of them was fully developed and brought their own element to Mia’s story.

I have to praise Rachel Burke for her writing. It really sucks you in, and makes you fall in love with their story.  From the first paragraph knew I would love the book because the writing was just amazing  It flowed well; there was no weird pacing, and no dead sentences. It's the type of book you can read in one sitting, and I did! I just found a new author to follow!

Overall, I really enjoyed finding Mia. It told the story of love, loss, acceptance, forgiveness, and I can go on.  It explores what life for not only the person is dealing with a disorder, but how it affects all around them. Finding Mia is truly one of my favorites this year, and I recommend it to all who enjoy a good contemporary read. It’s sad that if I wasn’t a part of this tour I would have never gotten the chance to read this book!