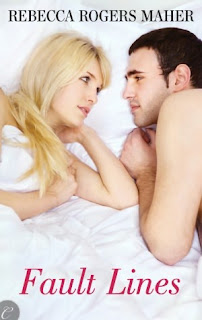 
Sarah Murphy plans other people's weddings. She's gorgeous and successful, but she also carries a dark secret. At one of her events, she meets Joe Sullivan, a sexy photographer with a difficult past of his own. When he snaps a rare unguarded photograph of her and captures the real person hiding behind the facade, she feels exposed. To restore the upper hand, she tries to do what she always does: use sex to defuse the situation. While Joe is eager to deepen his relationship with Sarah, he's aware of her emotional shield and the way she disconnects from her body. Seeing her at her most vulnerable doesn't scare him off, but he needs to know what she's hiding. Sarah has a tough decision to make. Does she want to go on living a lonely, emotionally frozen life? Or can she finally risk revealing the truth and move forward with Joe?

My thoughts
The Novel Fault line by Rebecca Maher is a book that will engage you, it will bring forward certain thoughts and emotion that will make you feel the character’s hurt.

This is not your typical girl meets guy, they fall in love, and everything is then sunshine in rainbows. This is a story about real characters. That is flawed, and is facing some problems that most are facing today but it’s rarely talked about.

I loved that Maher’s characters are real and broken. Maher doesn’t shy over the topic of sexual abuse and through Sarah you learn that it isn’t something one can just “Get Over”.

Fault lines is about Sarah a party planner who loves to be in control and one way she controls situations is through sex. She is the type to “love them and leave them”. She doesn’t do relationships because she can’t control them, she figures if you just have sex and don’t form any connections then nothing can go wrong, no one can hurt you. Joe a gifted photographer they met up at a wedding and by the end of the night end up together. Instead of the rainbows you get a pair of adults who are trying to overcome their troubled past and maybe have a better future. The only thing is their journey is not a smooth one, and their past problems are anything but light. This story deals with alcoholism and the aftermath of sexual assault. It’s not for the faint heart-hearted.

Only gripe I have with fault lines is that it was not a romance novel. It was a story about recovery first and romance was little and far in between. But after you get over that piece of information the book was pretty good.

Overall, the writing was good, the message behind it good, but a bit depressing and not enough romance for me!